Speaking of our life in Christ, and His purposes on earth

Nailed to the Cross!

This weekend we celebrate the greatest event in human history.  That great event is the death and resurrection of Jesus Christ, the Son of God.  He came to earth as a man, lived a sinless life, taught extensively on the Kingdom of God, and then voluntarily went to the Cross to give Himself for the sins of mankind.  Do we really understand the magnitude of this?  What Jesus did at the Cross opens the door for each of us to have eternal life.  That is why this is without doubt the greatest event in human history.

It is sin that keeps us from knowing God and from experiencing eternal life.  Paul gives us the picture of a certificate of debt (Colossians 2:13-14) that has been issued to each of us.  It is a debt of sin that is overwhelmingly condemning us, a debt which we can do nothing about!  It is similar to the servant who owed his Master ten thousand talents and had no way to repay (Matthew 18:23-35, specifically verses 23-25).  Just to put this into perspective, ten thousand talents would be about $7,500,000,000 in today’s currency.  How could a servant owe that much money?  And how could he possibly even begin to repay?  That gives us some idea of what it means to have an impossible certificate of debt that has eternal consequences hanging over our head.

Jesus took the sin of the world on Himself.  He took that certificate of debt for each individual person, that was so hostile to us, and He destroyed it by nailing it to that Cross….. “having canceled out the certificate of debt consisting of decrees against us, which was hostile to us; and He has taken it out of the way, having nailed it to the cross.” (Colossians 2:14)   Or another way to put it, He paid the debt for us!  This is God’s great gift to us, available to everyone of us who believe, no matter what our nationality, race, economic or social status, or anything else.  None of us deserve such a Gift, so it has nothing to do with how good or how bad we have been.  It is grace that has provided such a Gift.

We live in a world that has been terribly corrupted.  Corrie ten Boom, who suffered greatly in a Nazi concentration death camp for following Christ, once said,

“If you look at the world, you’ll be distressed.

If you look within, you’ll be depressed.

But if you look at Christ, you’ll be at rest.”

We live in a world that has been terribly corrupted.  I just returned from Mexico a few days ago where a friend (I have stayed in his home) was kidnaped, robbed, and brutally killed.  While I was in Mexico last week, the family was notified that this had happened to their son/brother.  We were in shock over his untimely brutal death, but also over how fellow humans could do such things.  In this case, however, we could rejoice in the fact that this brother’s certificate of debt had been nailed to the Cross, and that he had received this Gift of God by faith.

What we celebrate this weekend is beautiful, powerful, and life changing.  May we all begin to comprehend at a much greater level the magnitude of Jesus’ death and resurrection.  As we do, the result will be joy; and we will have a renewed passion to spread the Good News of what He has done for us to the whole world, beginning with those around us! 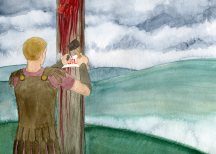